Michael Crawford on The Imam, the Pasha and the Englishman 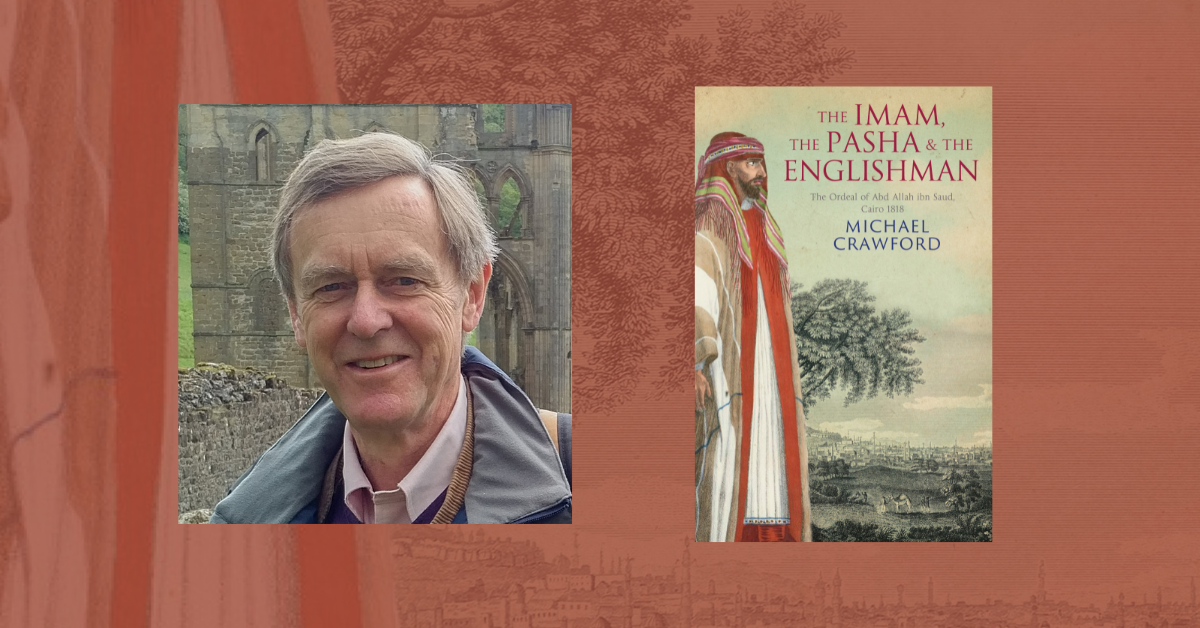 Ahead of the publication of his latest book The Imam, the Pasha and the Englishman, author Michael Crawford reflects on what inspired him to write about an unexpected historical encounter…

Lockdown makes a good time to research and write history, provided you have your source material to hand and don’t need to consult libraries.

Early 19th century western travellers around the Eastern Mediterranean were used to dodging the plague and facing quarantine. Researching The Imam, the Pasha and the Englishman has brought home to me that there is nothing unprecedented in the present situation. All the main protagonists in my book — the Saudi Imam ‘Abd Allah, Muhammad ‘Ali Pasha of Egypt and John Bowes Wright of Jesus College, Cambridge — had personal experience of the plague, which swept through their respective cities (al-Dir‘iyya, Cairo and Cambridge) over the period 1809–15. As Jonathan Sumption reminded us early in the pandemic, humankind has a short popular memory. For we have been here many, many times before.

There is symmetry too in the fact that many western travellers used tedious but obligatory spells in the lazaretto to write letters, verse and books. Perhaps, one day someone will produce a quarantine anthology?

My new book brings together in one palace chamber — in one dramatic encounter — three men from different political, religious and social cultures: two past enemies and one observer. Imam ‘Abd Allah, transiting Cairo in November 1818, is on his way to execution in Istanbul. He is a dead man walking, and knows it. His nemesis, the crafty, ruthless Muhammad ‘Ali, is enjoying the occasion to be gracious to his doomed prisoner. Bowes Wright, Fellow of Jesus, Cambridge, Whig and Freemason, is present in the margins and later writes it up for his oldest friend and regular correspondent, Joseph Lamb, an eminent businessman of Newcastle.

As a historian of the pre-modern Saudi state and Wahhabi movement, I have always been troubled that the execution of the First Saudi State (1744-1818)’s last ruler has been largely ignored by Saudi chroniclers and historians. Imam ‘Abd Allah, for all his hardy courage, has been treated almost as an embarrassment. An unimaginative military and political leader, certainly, but not solely responsible for defeat in a long attritional war against Ottoman forces. In any account of the First Saudi State, surely his poignant last journey, transit of Cairo and brutal end in Istanbul (beheading after torture) warrant more than a cursory footnote?

Researching The Imam, the Pasha and the Englishman has brought home to me that there is nothing unprecedented in the present situation.

When fellow historian of the peninsula, and founder of Arabian Publishing, William Facey told me a few years ago that the imam’s meeting with his conqueror in Cairo was witnessed by a visiting Englishman and described by him in private correspondence, I was inspired with Will to investigate the episode further. We produced a first cut in a brief article published in 2017. Will then stood aside in favour of other writing commitments on later Arabian travellers, while still contributing in the valuable role of editor.

What intrigued me most was the opportunity to compare this freshly unearthed account by an observant, politically attuned traveller with a dramatic passage towards the end of the chronicle of al-Jabarti, greatest of all pre-modern Arab historians (if we leave Ibn Khaldun out of the equation). Muhammad ‘Ali, like the sultan in Istanbul later, was determined to make high political theatre of the defeated Wahhabi’s presence. Both al-Jabarti and Bowes Wright capture this from their different perspectives. While the Englishman adopts the anti-Wahhabi line of his Ottoman hosts, the Egyptian al-Jabarti is more sympathetic to the Saudi imam than he is to Muhammad ‘Ali. The sultan later finds the pasha to be a greater threat than the imam to his empire.

The book sets out the regional context for the Cairo encounter and its grisly aftermath in Istanbul. It covers the course of the brutal war; the uneasy relationship between the ambitious pasha in Cairo and the wary sultan in Istanbul; the Saudis’ earlier controversial removal of the treasures from the Prophet’s tomb in al-Madina and justification for this; the Ottomans’ desperate desire to retrieve them; and the imam’s final few days in Istanbul being interrogated about the treasures and paraded, before his lifeless remains are flung into the Bosphorus.

Drawing on Bowes Wright’s many extant letters to his Newcastle friend, I outline his previous experiences, such as his flight from Paris on Naploeon’s reappearance there from Elba in 1815. I also describe his Francophile Whiggish attitudes, including distrust of his own government and sympathy for Napoleon. There is a dinner with the Duke of Sussex, most senior English Freemason, who is estranged from the Royal Court because of his morganatic marriages. He too disapproves of the war against Napoleon and says, just before Waterloo, that he will speak out in Parliament against it…

While the Englishman adopts the anti-Wahhabi line of his Ottoman hosts, the Egyptian al-Jabarti is more sympathetic to the Saudi imam than he is to Muhammad ‘Ali. The sultan later finds the pasha to be a greater threat than the imam to his empire.

Bowes Wright may not be politically of the first rank, but he is well connected and, partly thanks to his engaging personality and Freemasonry, has a range of encounters on his travels in 1817–19 with Byron, ‘Ali Pasha of Ioannina (also soon to lose his head), and traveller William Bankes of Kingston Lacy (in the lazaretto). Bowes Wright is a boulevardier as well as an adventurous traveller. By the end of his expedition to the Eastern Mediterranean and passage though plague-ridden Istanbul, he is pining for European female company. Disappointingly, he resorts to code in describing his dalliances in letters to his friend.

Why did Muhammad ‘Ali invite this engaging Englishman to witness the crowning moment of his personal triumph over the Saudi leader? Probably because he was not permitted by the sultan to post representatives to western capitals, and wanted an eye-witness account to receive public currency in Europe. Two centuries late, here it is.

You can purchase The Imam, the Pasha and the Englishman: The Ordeal of ‘Abd Allah ibn Sa‘ud, Cairo 1818 here.