Geraldine Rendel (1885–1965) was born in London, the third child of Gerald Beresford FitzGerald, a minor but wealthy Victorian novelist. Her social prospects received a setback in 1904 when her father went bankrupt, but in 1914 she married George Rendel (1889–1975), an ambitious and talented young man embarking on what would be a highly distinguished diplomatic career. By 1930 George had risen to become head of the Eastern Department of the Foreign Office, responsible for formulating British policy in the Middle East, and it was during his tenure, in 1937, that he and Geraldine were invited by King ‘Abd al-‘Aziz to travel across Arabia. 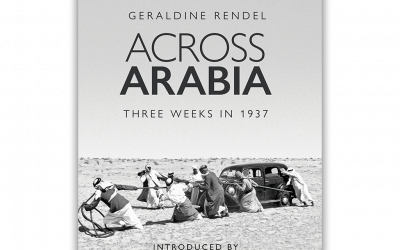 Across Arabia: Three Weeks in 1937

At the end of March 1937, Geraldine Rendel found she had achieved a trio of unintended distinctions. As the first Western woman to travel openly across Saudi Arabia as a non-Muslim, the first to be received in public by King ‘Abd al-‘Aziz, and the first to be received at dinner in the royal palace in Riyadh, she had joined a tiny coterie of pioneering British woman travellers in Arabia.