Born in Pennsylvania, George S. Rentz (1912-87) showed a talent for languages from an early age. Becoming involved with the Arab world by chance in 1932, it was while teaching in Aleppo that he first conceived his interest in the new state of Saudi Arabia emerging in the Arabian Peninsula. Returning to complete his university studies in the USA, by the end of the 1930s he had embarked upon the thesis published here. He visited Saudi Arabia for the first time in 1944, and in 1946 he was recruited by the Arabian-American Oil Company (Aramco) to set up a research and translation division at Dhahran. His sojourn there (1946-63), where he immersed himself in the history, culture and geography of the Arabian Peninsula, transformed him into Aramco's resident authority on Arabic and Arabian matters and established him as a scholar of international repute. Rentz returned home in 1963 to take up a post as curator of the Middle Eastern Collection at the Hoover Institution at Stanford University. In the USA he continued to teach and inspire his students. Though he himself published little, he was renowned for his extraordinary erudition. He influenced a generation of Arabist scholars, and it has been truly said of him that he laid the foundations for the study of Saudi Arabian history as a scholarly discipline in the West. 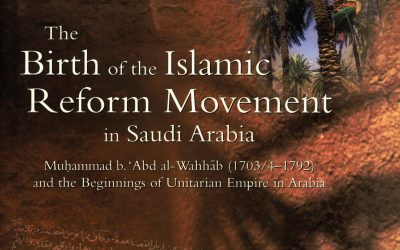 The Birth of the Islamic Reform Movement in Saudi Arabia.

Currently out of stock.

Saudi Arabia is the focus of much international attention today. However, little has been published in English on the background to its culture and its roots in the First Saudi State that arose in 18th-century Najd. The Islamic reform movement that infused it with its sense of mission, and the life and thought of Shaikh Muhammad b.`Abd al-Wahhab (1703/4-1792) the teacher who inspired and led it, have similarly been neglected.